On Sunday 6th April 2008 braving the bad weather SSKI London sent a team of 10 to the SSKI Shotokan Shield, held at the Hemel Hempstead Honbu Dojo and put up an excellent show.   First up was Katie Beck who picked up a bronze medal in the Ladies Junior Kata.  SSKI London had two competitors in the Ladies Senior Kata Yoko Isaji & Karin Haberkorn, Yoko narrowly missing out on the final but Karin won the event with an excellent rendition of Sochin, after initially drawing with A-Squad member Alexis Rayman for 1st place.  In the Mens Senior Kata, the days largest event, Nick Ross-McCall, Johnny Chiodini, Kaan Yargici & Abe Katz all performed well but missed out on the final, but club instructor Adam Cockfield won the event with performances of Nijushiho & Unsu.  Karin Haberkorn was then up again in the Ladies Senior Kumite, winning her way through to the final only to loose after being one wazari up, Alexis Raymen scoring with an excellent Jodan Mawashigeri to take revenge for her loss in the kata.  Some more strong performances from all the London competitors in the Mens Senior Kumite saw Abe Katz narrowly loose to Dougie Carson who eventually went on to take third place be beating London’s Nick Ross-McCall.  The event was won by Dan White, who beat Adam Sensei in the final.  London then went on to take 1st and 3rd places in the Adult Team Kata.

The Shotokan Shield is set up to find the associations best all rounder, so after totting up the scores from the three events the Shield Winners were announced with Londons Karin and Adam taking the Ladies & Mens titles respectively, the childrens title was taken by Thomas Carson (The three shield winners are pictured below).

The final event was the exhibition Team Kumite match between London and the Hemel Honbu dojo.  Nick and Abe lost very narrowly in the first two fights, Adam then won the 3rd fight, Seth King put up an valiant fight only to suffer a suspected broken nose, meaning his opponent was disqualified.  The match went into the final fight with Johnny Chiodini just missing out, meaning the Hemel dojo won 3-2!

It was an excellent day from the London dojo’s perspective, with everyone performing very well and with a great attitude and will only stand everyone in good stead for competitions in the future.  After the event Malcolm Sensei commented on the strong showing from the London club, both in terms of numbers and performance.  Well done everyone, also a big thank-you to those who came to support the club. 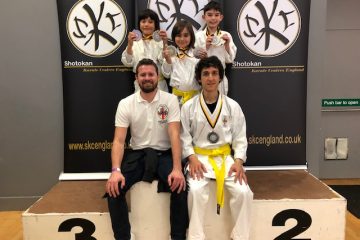 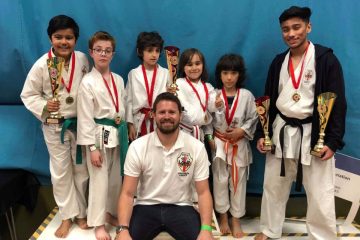